About this sports association
Master of mathematics and fencing: Ludolph van Ceulen
Ludolph van Ceulen was born in the year 1540 and moved from Delft to Leiden around 1594, where he would submit a request to establish a fencing school on 9 June 1594. The city consented and granted him permission to establish a school in the Faliedenbegeinkerk (what is now Rapenburg 70-74). Unfortunately, there are only a few remains of this building and no manuscripts left of his school in our time. In addition, most people would associate van Ceulen with his book Vanden Circkel. This work shows his recalculation of pi (which was also the inspiration for his memorial in the Pieterskerk in Leiden).
To honour this remarkable man, a group of students at Leiden University came up with a plan to bring life into the old sport at Leiden. The founding board started the student sports association in October 2015 and is still growing every month. Don't wait to contact us!

Historical European Martial Arts (H.E.M.A)
At this student sports association we practise Historical European Martial Arts. But what exactly is H.E.M.A? And how do we practise it at our association?
Europe has a long standing tradition of martial arts which is in no way less impressive than the oriental martial arts we are used to. These martial arts were practised throughout Europe for several purposes, fighting battles or settling a personal dispute for example. Many of these martial arts have been forgotten over time, however, several manuscripts and books have been handed down to us. These works were written by the masters of that time and discipline and therefore these manuals instruct us on how to practise these ‘forgotten’ arts. This sports association strives to ‘revive’ these European martial arts and encourages its members to reengage with H.E.M.A.
Our definition of H.E.M.A is as follows: H.E.M.A. is a fighting style or martial arts that was practised before the 1950’s without the use of firearms. Our training is based on historical sources and we fight using historically accurate weapons as often as possible (steel is only used when the situation is safe. We do not use weapons with a sharp edge).
Even though it is based on historical sources, H.E.M.A is a modern sport. Practitioners wear protective clothing which meet contemporary standards, and use a modern version of the pre-1950 CE weapons. This is the reason why H.E.M.A differs from re-enactment; the latter is not only focused on historically accurate, yet safe weapons, but also on historically accurate clothing/gear.
At this moment we train with Messer, and Viking age Spathae and shield. Occasionally, we practise wrestling, try new techniques, or practise with other weapons such as dagger, quarterstaff or long sword. Long sword, however, is rarely used at our association due to the heavy protection which is needed to fight safely with this weapon.

If you are interested in the sources that are used as a foundation for our classes you can consult the following sources. These sources also contain images of the previously mentioned used weapons:
The wrestling and knife fighting system by Fiore de’i Libre , from 1404.
The Messer system by Johannes Lecküchner, from 1478.
The techniques in “Quarstaf” fighting by Joachim Meÿer, from 1570.

Practical information
Are you wondering if this is a sport for you? You can attend one of our classes in order to find out. Please sent an email to: hssv.lvc.bestuur@gmail.
We will let you know as soon as possible whether you can attend and give you directions to our location.

Membership
Did you partake in one of our classes? Enjoyed it, and want to become a member? Great! In that case you can just walk up to one of our board members. They carry a registration form that you can fill in. This form will give you the option to become a member for 1 month, 6 months, or 10 months (the contribution depends on the length of your membership).
The contribution can only be payed via bank transfer. 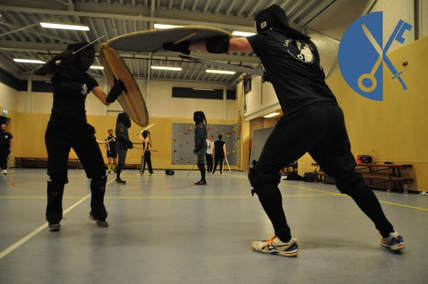